In what Fiore dei Liberi was fighting? This project has shown us that nothing is as it seems … 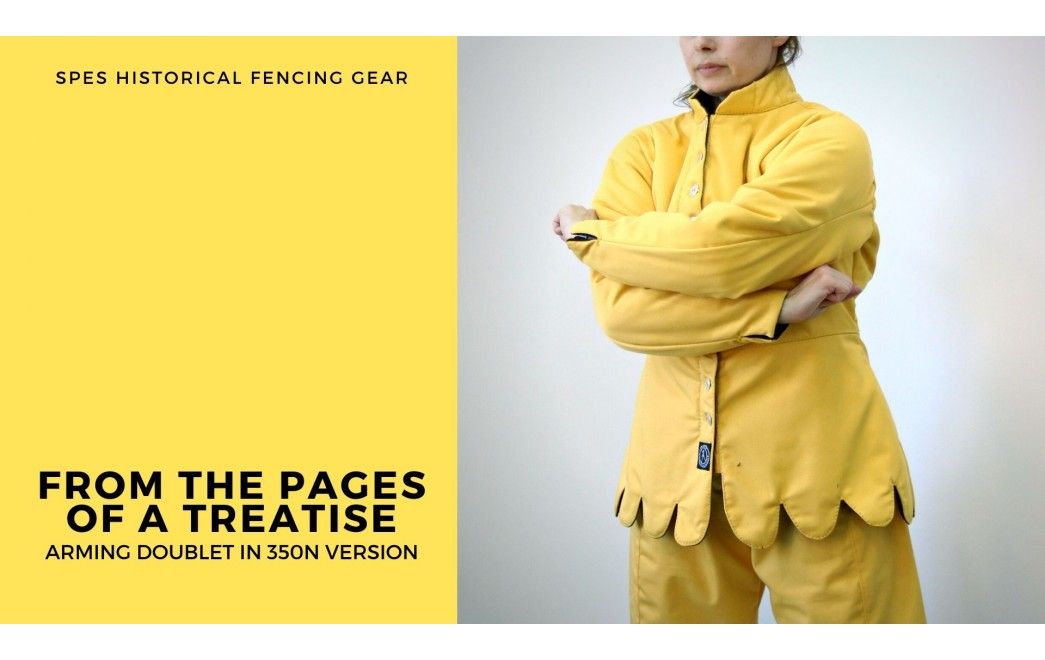 Do you know the fencing treatise entitled The Flower of Battle? This excellent work dates from around 1400 and was written by Fiore dei Liberi, who lived at the end of the 14th century. He was an outstanding knight, diplomat and fencing master.

This treaty has recently served as an inspiration for a custom project. Interestingly, this is something that we have been thinking about for a long time in the context of expanding the Histfenc offer.

However, before we get to the point - what was produced in our workshop, we would like to introduce you to the process of creating the final product. As always in the case of this type of orders, we reach for historical sources, which, due to the illustrations, are a treasury of knowledge not only about the way of fighting, but also about the clothes themselves.

Pourpoint, gambeson, or maybe a doublet?

As for Fiore, several copies of his works have survived to this day. We will focus on the MS Ludwig ⅩⅤ 13 manuscript and on an illustration from Folio 22r.

It shows a man in a fencing position, as evidenced by the golden crown on his head. The figure wears matching hose and (most likely) a pourpoint or gambeson cut at the waist that hugs the hips and waist, with a cutout on the lower edge.

Most likely, because it is not entirely clear what type of clothing we are dealing with here. Most of the presented characters in Fiore are painted in a quite schematic way, and their costumes are poor in detail. Therefore, it is difficult to determine exactly which type is meant.

Interestingly, however, a similar garment - without a cutout, but with slits on the sides - can be found on many other pages of this manuscript. And if it weren't for the lower, ornate cut edge, you might consider the illustrations to be a doublet, however there also should be visible attachments to the hose and front binding.

Analogous decorative cutouts on the lower edge can be found in various depictions of gambesons (including the arming doublet presentation) in the relic called Uomini Illustri, dated 1435-1445, showing King Syphax. The garment shows horizontal seams running from the navel downwards and on the lower part of the sleeves. There are also strings for attaching armor to the legs and arms.

By the way, small digression - the arming doublet is called this way because of its combat purpose, and thus - the resulting differences in design and functionality compared to a regular doublet.

And the winner is…

But let's get back to the topic and consider what type of clothing we are dealing with. Knowing the history and messages about the master Fiore, we know, among others, that he competed with other masters of fencing only in gambeson and chamois gloves. It therefore seems reasonable to assume that the figures of the swordsmen appear in the treaty at least in a gambeson or in armor (and there are quite a few of the latter).

Based on the above illustration, it can be assumed that our design should have a similar cut to "pourpoint a quatres quartiers", a doublet consisting of four quarters. This design catches the eye with a visible cut at the navel and sleeve without additional cutting lines. On the other hand, other illustrations also show the cut lines on the back and the collar, which can be found on card 22r.

In fact, what will differentiate our garment from the construction of the doublet is the lower edge cut into a semicircle in the shape of a fish scale.

Four quarters is a nice base

Bearing in mind the above, we decided to use one of the ready-made designs available in the Medieval Market offer. The choice fell on the arming doublet, the construction of which also consists of four quarters, which makes it an ideal starting point for preserving the historical shape.

Speaking of which, one of the most important structural elements is the above mentioned cut off at the level of the navel. This solution means that when fastened, the doublet rests strongly on the natural narrowing at the waist and extends towards the hips, thanks to which the tension from the legs (or armor elements to the legs) are not transferred higher - onto the shoulders. This is important, for example, when you want to use high covers with a sword.

Also thanks to such a structure, a bulge is created on the chest and ribs, characteristic for presentations from the second half of the 14th century and the first of 15th.

However, let's not forget that the jacket is ultimately intended for HEMA, which is why we had to give up materials typical of historical clothing, such as wool, linen or silk. Instead, we chose the same fabric that we use in the AP350N or FG350N.

The same applies to the closure, where apart from the buttons (in this case the same as in our JF jacket), we also added a zipper to additionally secure one of the critical points, which is the chest.

We left the filling the same as in our arming doublet, it is also known that we used the already existing FGs. In addition, under additional security, we gave a tab that an additional plate brought. After all, we have finished the lower edge with a decorative cut-out.

Time for a short summary of the most important features of the HEMA jacket, inspired by historical works, including Fiore dei Liberi. The result is a fencing jacket: 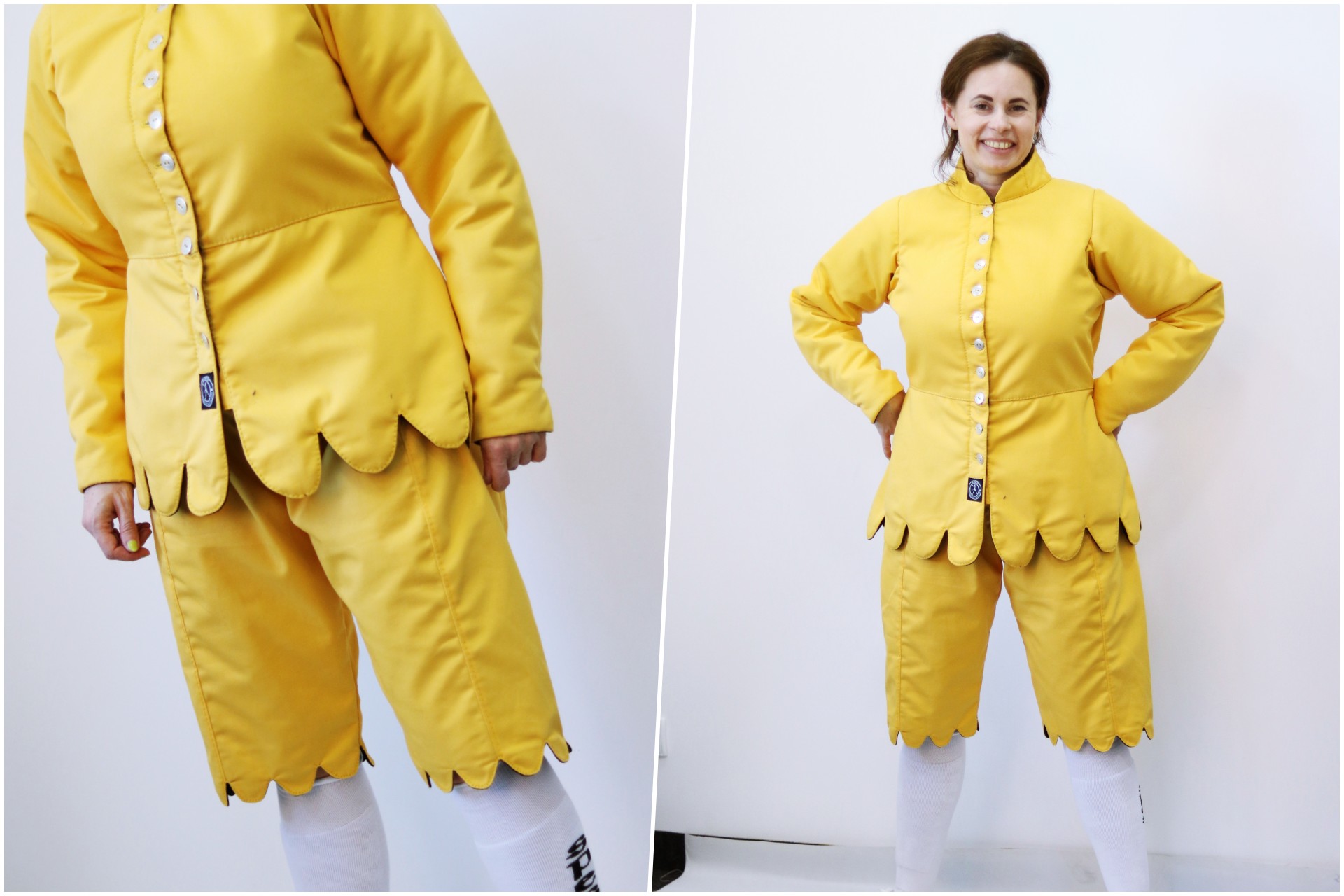 Will such a jacket be offered by Histfenc?

As we mentioned at the beginning, not from yesterday we had a similar project that could appear permanently in our store. In fact, we have been working on introducing products (or, in fact, a whole series) for some time, inspired not only by historical clothing, but also by illustrations from preserved fencing treatises.

We hope that this news will please not only people who want to recreate both fencing techniques and clothes presented in such sources. You have your types, what will it be?